When faced with the need to re-roof, many homeowners are finding the costs to re-roof their home to be quite a bit more than they thought it would be. When looking for a way to cut costs, you may find it’s cheaper to not hire a licensed and insured roofer.

Roofing material is made from petroleum which seems to increase in price with every passing year. Labor cost is driven by an ever-shrinking work force (there are few technical colleges, if any, that teach roofing) that at the same time is rife with worker’s compensation insurance fraud.

And so, many homeowners, staggered by the costs (particularly in large urban areas where labor costs can be particularly high), are tempted to hire an inexpensive roofer who may not exactly be legal. And while it’s true an unlicensed and/or uninsured roofer is certainly going to be a lot cheaper, there are more reasons than meet the eye to think twice before you do. 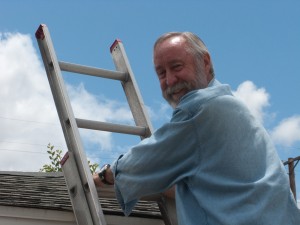 What is a contractor’s license anyway? We assume a contractor knows a great deal more than just a roofer and that’s likely to be true, but with a contractor you are not only getting something of a guarantee that he has learned everything the state believes he should have, but he has to be bonded and he has to do a good enough job that people are not filing complaints against him with the CSLB.

Unlicensed roofers are inherently less established. Generally they are going to keep a lower profile, for pretty obvious reasons and you may not want a roofer who is difficult to find and moves around.

Roofing is a fairly destructive activity and is a major change to your home (in human terms, it’s like getting a major haircut) and things do go wrong. With an unlicensed roofer, you have little recourse if things go badly. If it’s a big enough mistake, and he’s not licensed and doesn’t have a reputation, he may decide to just walk away from the job, leaving you with, for instance, the wrong color roof, and a half done job.

Even if he is licensed, if you’re roofer doesn’t exist on the internet, then he doesn’t really exist. Find a licensed roofer so you have recourse against him with the power of the state. And find a roofer that is known and has a good (valuable) reputation that he doesn’t want to lose.

J and J Roofing in Los Angeles is both a licensed and insured roofer. Call us if you need work done on your roof.

Insurance. Last but not least is insurance. Roofers have two kinds. Workers compensation (workcomp), for labor injuries, and general liability, for everything else. Workcomp is the most important. If one of his guys takes a swan dive off your roof, God forbid, you don’t want the bill for it. General liability isn’t a must (it’s not legally required), but if you’re worth a lot of money, or it’s a commercial property it probably something you will want and it comes with a price. A roofer with general liability will cost more.