How Do You Know if You Have a Roof Leak?

Sounds like a silly question, if there’s water dripping from your ceiling you probably know the answer but it’s not always so simple.  A lot of times a roof leak doesn’t show up inside the home and you simply may not be aware of it.  There can be many causes for this. A lot of homes have extensive overhangs and any roof leaks there probably will not show up inside the home. Most homes have insulation and a roof leak that drips down onto the insulation will get soaked up and may not actually show up on the ceiling. Leaks can drip down inside walls and not show up as wet spots.

You get the idea: roof leaks can happen without being very visible and these often lead to mold or damage to framing that the homeowner is not aware of until it becomes extensive. That is not speculation, as a roofer for 20 years, I can tell you that on a weekly basis, I remove roofs, only to find extensive dryrot to the wood deck and even framing (structural) which occurred due to leaks which have been ongoing for many years, in some cases, decades.

It’s important to have your roof checked every year, usually in the early fall, by a professional roofer. Roofing estimates should not cost you anything, and they should be free of any obligation. And if a roofer says you have roof problems – don’t take his word for it – make him prove it to you (to the best of his ability and note, that is not always possible so take that with a grain of salt). But for example, in-as-much as possible I take photographs of every problem area on a person’s roof and even if it’s not obvious I can digitally edit the photograph to show the homeowner what I’m talking about and I email those pictures along with the proposal. 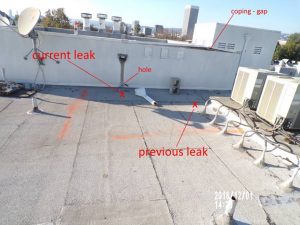 How Do You Know if You Have a Roof Leak?

The best time to do this is before winter or after, but regardless, if you haven’t had your roof checked for a roof leak in a while, make an appointment with your roofer and if you don’t have one, check Yelp/Google/Angie’s List, etc, for the top-rated roofers in your area.