Well, it is a little early to say for sure if we’ll have an El Nino year this year, But the chances that we will have a lot of rain are going up with each month that goes by.  Understand that the subsurface warm mass in the Pacific which is on par with the mass we had in 1998, which was a major El Niño year, is the primary motivating force for this…

Here’s what the EL NIÑO/SOUTHERN OSCILLATION (ENSO) DIAGNOSTIC DISCUSSION issued by the CLIMATE PREDICTION CENTER/NCEP/NWS and the International Research Institute for Climate and Society said on 8 May 2014.  “ENSO Alert System Status: El Niño Watch. Synopsis: Chance of El Niño increases during the remainder of the year, exceeding 65% during summer.” 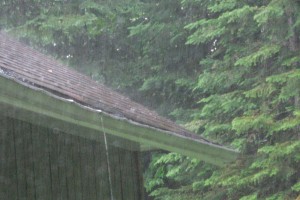 Why does this matter right now?  Given how little rain we’ve had over the last few years, if we get significant rainfall this winter, we can expect 3 to 4 times the normal amount of volume for a normal winter.  In the case of our company, in the 2005 winter, when we had a relatively mild El Niño, we were booked out six months (and we were running 35 roofers at that time).

The next few months may just be the cheapest and best time to get any roof work done in the coming years.

What is the solution?   We suggest the J&J Roofing check-up service.  it’s inexpensive, thorough and will get you in-the-know before the storms.

For $155.00 we will inspect your roofing system and do minor maintenance.  Or, if there is too much work to do within the scope of a simple roof check-up (which happens often), we’ll just do a free estimate and send it to you – you’ll owe us nothing and there’s no obligation.  For many roofs that are in decent condition, the check-up and the maintenance that goes with it is enough to carry you forward for years and it’s a win-win.  In a roof check-up, since our estimator is able to do the work on the spot, it means we don’t have to then send out another roofer which saves everyone time and money.